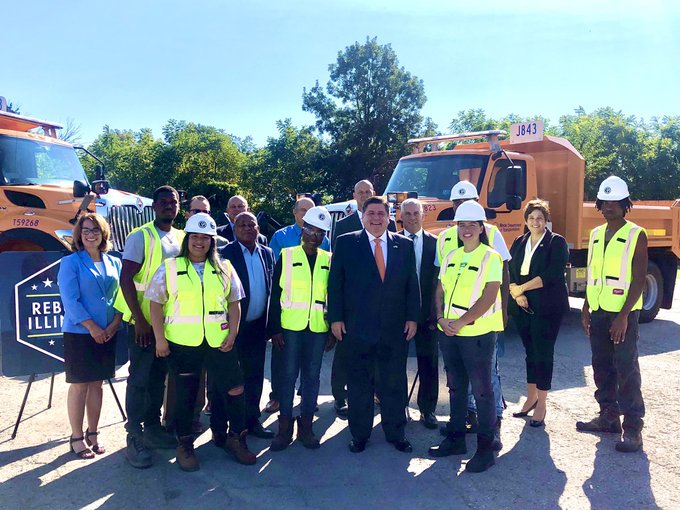 The Illinois Department of Transportation (IDOT) has announced the start of multiple improvement projects on Interstate 55 from Joliet and Shorewood, including a new diverging diamond interchange with Illinois 59.

The $93 million infrastructure project in Will County will be funded through the Rebuild Illinois capital program.

Advance work started in 2021. The entire project is expected to take two full constructions seasons to finish, with an anticipated completion date in late 2024 or early 2025.

Graduates of the Highway Construction Careers Training Program, an IDOT-initiative partnering with South Suburban College in South Holland and Kennedy-King College in Chicago to provide minority and female students the opportunity to get on-the-job experience toward full-time work and a career in the construction trades.

“Through Joliet and Shorewood, I-55 serves nearly 60,000 vehicles a day, but there is only partial access to both communities at the Illinois 59 interchange,” Gov. JB Pritzker said in a statement. “Thanks to a $93 million investment from our Rebuild Illinois Capital Plan, we are making several capacity, access, and safety enhancements — all while building a new diverging diamond interchange with Illinois 59.”

The main feature of the project involves IDOT building a new bridge to convert the I-55 interchange with Illinois 59 into a full-access, diverging-diamond design, with the East Frontage Road relocated and reconstructed.

Auxiliary lanes will be added to I-55 between the Illinois 59 and U.S. 52 interchanges to improve safety by better accommodating vehicles entering and leaving the interstate. Also, the Illinois 59 intersection with Seil Road will be improved and modernized. Pedestrian access will be built across I-55, with the addition of sidewalks and a multiuse trail. New noise and retaining walls also will be built along I-55.

Passed in 2019, Rebuild Illinois is investing $33.2 billion into the state’s aging transportation system, creating jobs and promoting economic growth. Rebuild Illinois is not only the largest capital program in state history but also the first one that touches all modes of Illinois transportation: roads and bridges, transit, waterways, freight and passenger rail, aviation, and bicycle and pedestrian accommodations.