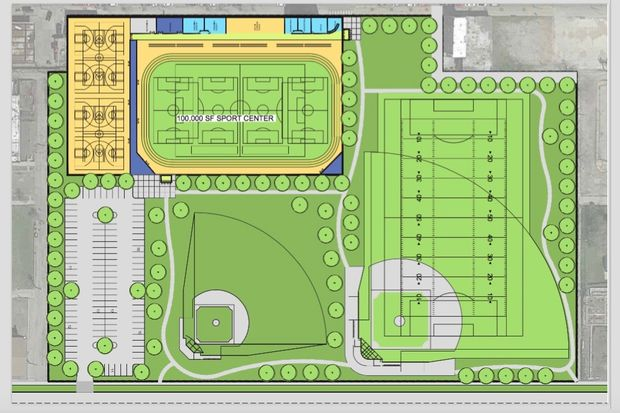 “This new facility will create the state-of-the-art facilities necessary to support both students and residents on Chicago’s west side,” Mayor Rahmn Emanuel said in a statement. “Together with the community and our private partners, we are proud to make smart, critical investments that help to strengthen the social fabric of this community and will benefit residents for generations to come.”

Earlier published reports indicate that Exelon Corp. and the Inner City Education and Recreation Foundation donated $3 million and $5 million respectively. DNAInfo reported in 2017 that the park district awarded a $1.6 million contract to SMNG-A Architects to oversee its  design and construction, including the district’s first indoor soccer facility. Altogether, the work includes $20 million for the indoor facility and another $5 million in outdoor improvements.

Investments include the addition of a natural turf baseball field; an artificial turf combination field for baseball, football, lacrosse and soccer; and a walking path around the park.

The park is expected to serve an estimated 7,500 new residents moving into the adjacent 120-acre mixed-income Roosevelt Square development. This will also serve residents in the co-located Taylor Street Apartments and Roosevelt Branch Library, which are expected to open in 2018.

The news release did not specify the project’s general contractor, and on Aug. 21, there was no indication in the city’s database of a building permit being issued for work at the site.