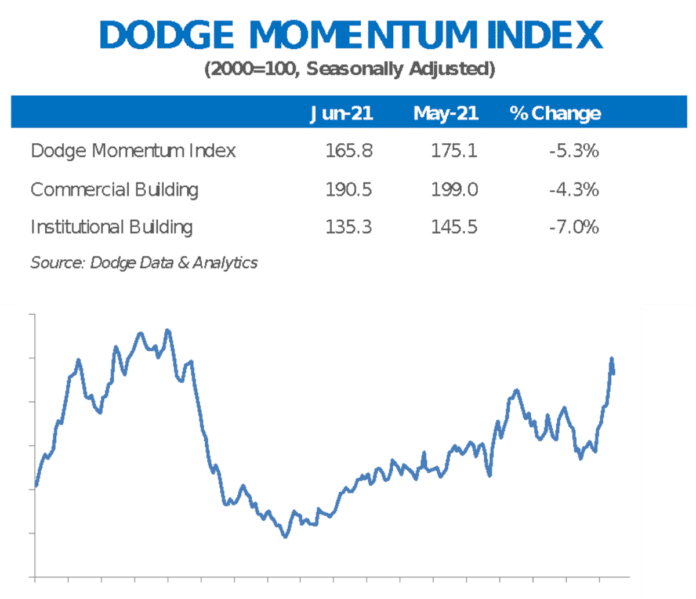 Following six months of consecutive gains, the Dodge Momentum Index fell to 165.8 (2000=100) in June, down 5% from the revised May reading of 175.1. The Momentum Index, issued by Dodge Data & Analytics, is a monthly measure of the first (or initial) report for nonresidential building projects in planning, which have been shown to lead construction spending for nonresidential buildings by a full year.

Uncertain demand for some building types (such as retail and hotels), higher material prices, and continued labor shortages are weighing down new project planning. Even with June’s decline, however, the Momentum Index remains near a 13-year high and well above last year. Compared to a year earlier, both commercial and institutional planning were significantly higher than in June 2020 (39% and 46% respectively). Overall, the Momentum Index was 41% higher.

A total of 13 projects with a value of $100 million or more entered planning during June. The leading commercial projects were a $194 million data center in Dulles VA and the $109 million FedEx warehouse in Cedar Rapids IA. The leading institutional projects were the $300 million Mt. Edgecumbe Medical Center replacement in Sitka AK and the $200 million renovation of the New York Public Library SNFL Branch in New York NY.

June’s retreat in planning activity is another sign that the recovery from the pandemic-led recession will be nonlinear. The current level of the Momentum Index and its underlying components, however, continue to signal that a more broad-based recovery in nonresidential construction starts will occur in 2022.