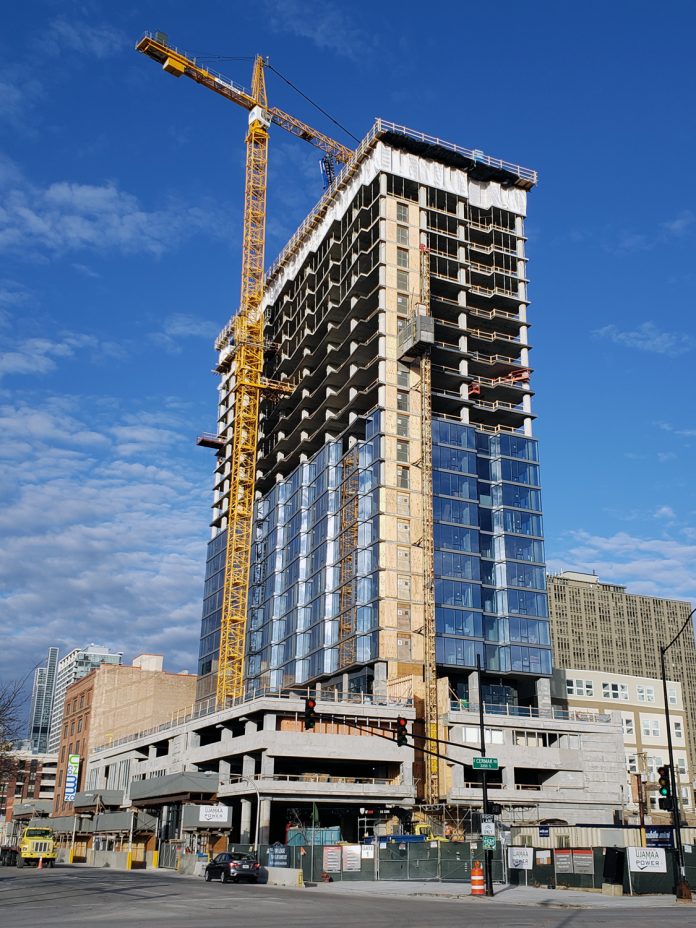 Draper and Kramer, Incorporated says it has celebrated the topping-off of its new 24-story apartment tower at 2111 S. Wabash Ave. in Chicago’s South Loop. Called Aspire Residences, the transit-oriented development – located less than a block from the CTA’s Cermak/McCormick Place Green Line station – is the largest residential community built in the South Loop’s McCormick Square area since 2010. Completion is scheduled for summer 2020.

Solomon Cordwell Buenz (SCB) designed the 275-unit tower, for which a $76 million building permit was issued in April .The general contractor for the project is a joint venture between Chicago-based Power Construction Company LLC and Ujamaa Construction.

“Aspire continues the transformation of this corner of the South Loop into a vibrant mixed-use district that is close to downtown while enjoying its own distinct identity,” said Ed Polich, executive vice-president of real estate with Draper and Kramer.

Polich says Aspire’s development is part of an overall strategy by Draper and Kramer to build or acquire well-located Class A properties in submarkets where long-term growth is expected.

“We believe this particular pocket of the South Loop is like Fulton Market five years ago or Wicker Park in the 1990s – a place that benefits from a rich history while embracing new uses that support continued growth and investment,” Polich said. “Here, that growth is especially evident in a pipeline of new entertainment offerings that continue to shape this area as a destination in and of itself, making it all the more attractive for new residential development.”