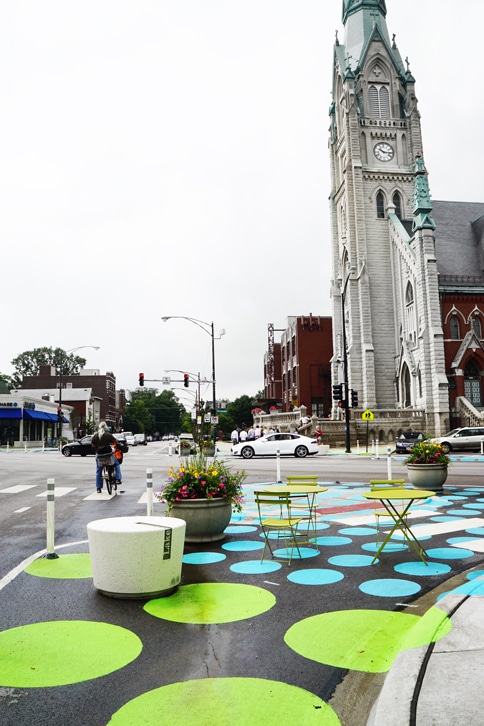 Construction on a Lincoln Hub streetscaping project will improve safety at a six-way intersection in Lakeview.

The $16.6 million project is funded through a combination of federal, state and local sources using the city’s Chicago Works capital investment plan, according to CDOT.

Polka-dot paint and plastic posts that used to create curb extensions at the intersection of Lincoln, Southport and Wellington will be replaced with permanent infrastructure.

The city plans 10 other streetscape enhancement projects in neighborhoods across Chicago and has committed $584 million for the work.

A ribbon-cutting ceremony was held for the recently completed Motor Row streetscape project.

Burke Engineering was the lead design consultant for the $11 million project and Sumit Construction was the lead construction contractor. Duroweld fabricated the gateway community identifiers that welcome all to Motor Row.

“By investing in infrastructure projects, we are doing more than just improving the appearance of our streets — we are also investing in the safety of our residents, encouraging economic development, and generating community pride,” said Mayor Lori Lightfoot.

“Streetscape investments represent one of the many ways we are combatting an increase in dangerous driving. “

The streetscape at Motor Row features:

The streetscape at Motor Row also features aesthetic improvements that will have a long-term impact on the surrounding community:

“Planning for the Motor Row project was a multi-year process,” said Alderman Pat Dowell. “Working in partnership with CDOT and the residents’ task force, we were able to create a streetscape that will bring lasting improvements to this section of Michigan Avenue for businesses and residents alike.”