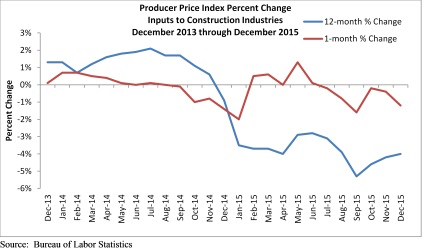 Construction material prices fell for the sixth consecutive month in December, losing 1.2 percent on a monthly basis and four percent on a yearly basis according to an analysis of the Bureau of Labor Statistics Producer Price Index released by Associated Builders and Contractors (ABC). Construction input prices have fallen 7.2 percent since peaking in August 2014, and have fallen in eleven of the previous sixteen months. Nonresidential construction input prices exhibited similar declines, falling 1.1 percent for the month and 4 percent for the year.

“Construction input prices continued to sink to the end of 2015, due in large measure to global deflationary forces that have become increasingly apparent,” ABC chief economist Anirban Basu said in a statement. “The World Bank predicts that the global economy will expand by less than three percent in 2016, very limited growth by historic standards. Last year, the global economy expanded by just 2.4 percent, with significant weakness recorded in much of the emerging world. Like last year, major emerging nations like Russia and Brazil are anticipated to be in recession.

“In addition, the U.S. dollar remains strong,” said Basu. “With only a couple of exceptions, the U.S. is the only major nation to increase interest rates. If interest rates rise as anticipated, the dollar will strengthen further in 2016, placing additional downward pressure on input prices. Even significant geopolitical events involving oil producing nations has not been enough to stem the decline in oil or other commodity prices.”

Only four key input prices expanded in December on a monthly basis: