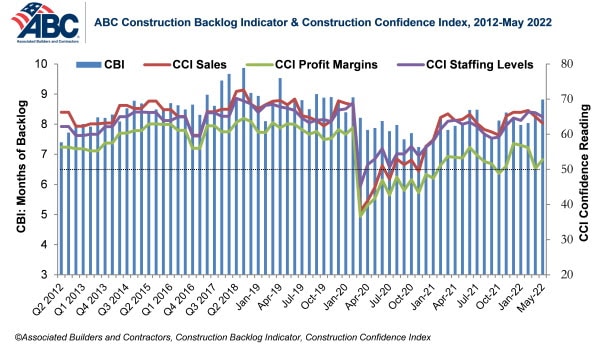 The Construction Backlog Indicator increased to nine months in May from 8.8 months in April, according to an Associated Builders and Contractors (ABC) report released recently. The stat is based on a member survey conducted from May 17 to June 3.

Backlog in the infrastructure segment jumped from 8.7 months in April to 9.3 months in May, and the Northeast and South regions continue to outperform the Middle and Western States with more than $100 million in annual revenues enjoyed the highest backlog, at 13.2 months.

“Backlog is up in every segment over the past year, including in the somewhat shaky commercial category. The largest increase in backlog has been registered in the industrial segment. More American companies are committing to place additional supply chain capacity in the United States, with Intel and Ford representing particularly recent and noteworthy examples.

“For contractors, the challenge will continue to be the cost of delivering construction services,” Basu said.

“The risk of severe increases in costs and substantial delays in delivery remains elevated given the volatility in input prices, the propensity of the labor force to shift jobs in large numbers and equipment shortages and delays. This ABC survey indicates that the proportion of contractors who expect that profit margins will expand over the next six months is declining, a reflection of lingering, worsening supply chain challenges.”