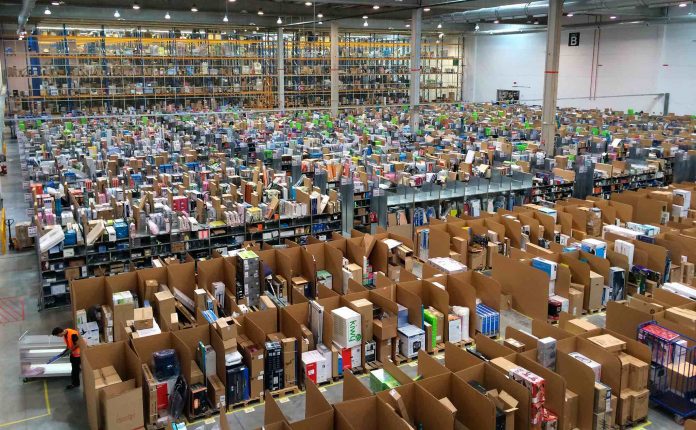 “In just over two years, Illinois has proven itself to be an ideal location from which Amazon can continue offering customers our vast selection and superfast shipping speeds,” Akash Chauhan, Amazon’s vice-president of North American operations, said in a statement. “We’re excited to be growing and creating even more full-time jobs that offer comprehensive benefits on day one as well as generous maternity and parental leave benefits.”

“Intersect Illinois has worked closely with Amazon for months to grow and maximize Amazon’s footprint in Illinois,” said Intersect Illinois CEO Jim Schultz. “Team members like Frank Cho recognized early on that Illinois and Amazon could be tremendous partners and that hard work is paying off. Illinois can offer Amazon exactly what it needs.”

During the past two years, Amazon has announced eight fulfillment centers in Illinois.

At the nearly one-million-sq. ft. facility in Aurora employees will pick, pack and ship small items to customers such as books, electronics and consumer goods. The other facility, spanning 400,000-sq. ft., will specialize in handling larger items like big-screen televisions.

“The City of Warrenville is looking forward to welcoming Amazon as its newest corporate neighbor along Route 59 in the City of Aurora,” said City of Warrenville Mayor David Brummel. “This project is yet another great example of municipalities and private entities working together to improve underdeveloped areas, create jobs, and grow the local economy in a responsible and sustainable manner. Warrenville is truly excited to be part of the public/private team that will make the Amazon facilities a reality.”

Illinois competed with several other states for this project, and the Department of Commerce worked tirelessly to bring these new jobs to Illinois, the news release reported. The EDGE program is the State’s primary mechanism to help encourage job creation and capital investment in Illinois.

The news release didn’t clarify the project’s value nor whether a general contractor or design professionals have been selected.